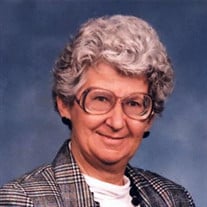 Waneta Shriver, age 91, of Farmington, formerly of Ruthton and Marshall, Minnesota, died on Monday, April 18, 2022, at Legacy of Farmington Senior Living Center in Farmington. Funeral Services are 11:00 a.m. Friday, April 22, 2022, at the Christiania Lutheran Church in Lakeville, Minnesota. Following the service, attendees are invited for a luncheon at the church. Visitation will be held from 10:00 – 11:00 a.m. Friday, April 22, 2022, also at the Christiania Lutheran Church. Interment will be 11:30 a.m. on Saturday, April 23, 2022, at the Ruthton City Cemetery in Ruthton, Minnesota. Following the burial, attendees are invited to the Ruthton Community Center for a second luncheon. In lieu of flowers, memorials are preferred to Huntington's Disease Society of America, American Cancer Society, Christiana Lutheran Church (in Lakeville) or St. Stephens Lutheran Church (in Marshall). Waneta Elaine Nielsen was born April 29, 1930, to Hans and Elsie (Campbell) Nielsen near Akron, Iowa. She attended country school in Akron until 1940, when the family moved to Ruthton, Minnesota. Following the family’s move, Waneta was baptized and confirmed at Hope Lutheran Church. Waneta graduated from the Ruthton High School in 1947, obtaining her diploma. On January 10, 1948, she and Leonard Berges were married in Hope Lutheran Church and lived in the Ruthton, Russell, Lynd, and Holland areas. The couple moved to Coon Rapids in 1966 and then to Marshall in 1976, where they ran the Marshall Machine Shop. Leonard passed away in 1988 due to complications of Huntington’s Disease. Waneta worked as a bookkeeper, waitress, and secretary to the Coon Rapids Fire Chief, Deputy Clerk of Court for Anoka County, and also as a clerk and auditor for the IRS. Waneta married Henry Shriver on August 16, 1991, and they made their home on a farm near Marshall. The couple made a lot of memories at a lake home on Lake Minnewaska near Glenwood. The couple then moved to a farm site near Ruthton in 1996. Henry passed away from leukemia in May of 2001. Waneta remained on that farm site until August of 2008 when she moved to an apartment in Marshall. Then in November of 2019, she moved to Lakeville to be closer to her daughter, and then she moved to a care facility in Farmington. Waneta was active in each church that she was a member of – teaching Sunday School, Bible School, singing in the choir, attending circles, and the LCW. She also volunteered for over 25 years with Huntington’s Disease Society of America where she served in various board roles. Waneta was a member of the American Legion Auxiliary and the Ruthton Senior Center. She enjoyed doing volunteer work with the Red Cross Bloodmobile and at SMSU where she focused her time in genealogy research along with many other duties. Waneta also had a love for traveling; having visited 40 states along with Mexico and Canada. She also enjoyed scrapbooking, crocheting, card making, growing flowers and had a love for cats. Waneta is survived by her son, Gary Berges (and Debi Benke) of Champlin; daughters, Sharon Buckley of Lakeville, Joyce (and Ange) Sireno of Mount Pleasant, SC, and Marlys (and Tom) Mohs of Robbinsdale; step-children, Ann Shriver of Eagle Grove, IA, Doris (Richard) Huber of Ghent, Rose Shriver of Mineral Point, WI, Pat Shriver of Minneota, Steve (and Lisa) Shriver of Lincolnton, NC; 17 grandchildren; 26 great-grandchildren; 1 great-great grandchild; nieces, nephews, other relatives, and many friends. She was preceded in death by her parents, Hans and Elsie Nielson; brothers, Ernest Nielsen, Everett Nielsen; sisters, Dorothy Raph Mueffles, Ellen Hansen; daughter, Eileen Bitker; stepson, Henry ‘Bud’ Shriver; sons-in-law Bill Buckley and Dennis Bitker.

The family of Waneta Elaine Shriver created this Life Tributes page to make it easy to share your memories.

Waneta Shriver, age 91, of Farmington, formerly of Ruthton and...

Send flowers to the Shriver family.