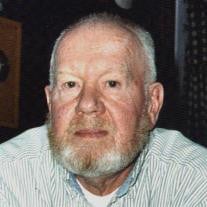 Warner Babcock, age 75, of Marshall, Minnesota, passed away on Friday, December 30, 2016, at his home in Marshall. Memorial Visitation will be held beginning at 1:30 PM Thursday, January 5, 2017, at the Hamilton Funeral Home in Marshall. Interment will be 3:00 PM Thursday, January 5, in the Marshall Cemetery. Warner Roger Babcock was born on January 11, 1941, in Lyon County, Minnesota. He was the son of Robert and Erma (Hall) Babcock. Warner was baptized as an infant and confirmed in his youth in the Methodist Church. He attended Marshall schools and graduated from Marshall High School with the class of 1953. Warner served for a short time with the Army National Guard before his training in airport baggage handling. He took a job at the airport in Chicago and then returned to the family farm in Lyon County 2 years later. Warner began working for Schwan’s, serving in Bowling Green, Kentucky, starting in 1976 and then as depot manager in Delaware from 1978 – 1989. Warner was a proud employee and was awarded several recognitions for his time with the Schwan’s Food Company. He returned to Minnesota and due to health concerns, he retired in the mid-1990s. Warner was a hard-working man who always enjoyed farming. His other enjoyments in life included watching NASCAR, gardening, bird-watching, fishing, and time spent with his grandchildren. Warner Babcock passed away on Friday, December 30, 2016, in Marshall, Minnesota, 12 days before his 76th birthday. Blessed be his memory. Warner is survived by his 5 sons, Warner Babcock, Jr., of Millbury, MA, Marc Babcock of Marshall, Dan (and Lynn) Babcock of Marshall, Ricky Babcock of Ivanhoe, Chad (and Yvonne) Babcock of Georgetown, DE; 7 grandchildren, Alysha Babcock, Rebecka Babcock, Brysen Babcock, Hannah Babcock, Ashley (TJ) Hickman, Hunter Babcock, Austin Babcock; great-grandson, Christian Hickman; siblings, Wayne Babcock of Minnetonka, Deloris Nesteby of Brooklyn Park, Betty Tallarida of California; nephews, nieces, other relatives and friends. He was preceded in death by his parents, Robert and Erma Babcock and infant daughter, Melissa.

Warner Babcock, age 75, of Marshall, Minnesota, passed away on Friday, December 30, 2016, at his home in Marshall. Memorial Visitation will be held beginning at 1:30 PM Thursday, January 5, 2017, at the Hamilton Funeral Home in Marshall. Interment... View Obituary & Service Information

The family of Warner Roger Babcock created this Life Tributes page to make it easy to share your memories.

Warner Babcock, age 75, of Marshall, Minnesota, passed away on...

Send flowers to the Babcock family.