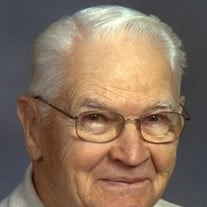 Marshall; Warren Adams, age 87, of Marshall, passed away on Friday, January 24, 2014 at the Minneota Manor in Minneota. A prayer service will be held on Thursday, January 30th at 7:00 p.m. at the Evangelical Free Church in Marshall. Visitation will be held on Thursday beginning at 4:00p.m. at the church. Funeral services will be held on Friday, January 31st at 3:00p.m. at the Mission Evangelical Free Church in Wilton, North Dakota. Visitation will be one hour prior to the service at the church. Interment will take place in the Mission Evangelical Church Cemetery in rural Wilton, North Dakota. Warren Olan Adams, the son of Orvis and Bertha (Janke) Adams was born on November 23, 1926 in Baldwin, North Dakota. On June 3, 1951, he was united in marriage to Vivian Carlson in Minot, North Dakota. He farmed in the Wilton, North Dakota area until his retirement. Besides farming, Warren was the school janitor and bus driver. In the winter’s and after retirement he enjoyed doing carpenter work and wood working. He was also a volunteer for the Wilton EMT. A charter member of the Mission Evangelical Free Church, Gideons and was on the Cenex Board. Warren moved to Marshall in 2003. He was a member of the Marshall Evangelical Free Church and active in the Gideons. Warren is survived by his children, Janis and Rev. Gordon Bakan of Wishek, North Dakota and Sheldon and Karla Adams of Marshall, Honorary children, Dan and Kandy Stevens of Marshall, five grandchildren, Nichole and David Soderberg of Marshall, Brittany Bakan of Ames, Iowa, Tiffany and Kaid Barnhart of London,England, Justin Adams and Natasha Adams of Marshall. Honorary grandchildren, Sawyer, Erin and Cloie Stevens, Patraporn, Eduardo, Cherry, Ellie , Alex and Julia and Hendrik. Also surviving are his sister-in-laws, Carol Adams of Bismarck, ND and Maybelle Carlson of Richfield, brothers-in-law, Harold and Bernice Carlson of Grand Forks, ND and Lester and Lillian Carlson of Richfield, and several nieces, nephews and cousins. He is preceded in death by his parents, his wife, Vivian, brother, Stanley Adams, grandsons, Brandon and Bryce Adams, great-grandson, Christopher Soderberg and honorary grandson, Reed Stevens. Memorials are preferred to the Gideons, Mission Evangelical Free Church or the Marshall Evangelical Free Church. Funeral arrangements are by the Hamilton Funeral Home in Marshall. Blessed be the memory of Warren Adams.

Marshall; Warren Adams, age 87, of Marshall, passed away on Friday, January 24, 2014 at the Minneota Manor in Minneota. A prayer service will be held on Thursday, January 30th at 7:00 p.m. at the Evangelical Free Church in Marshall. Visitation... View Obituary & Service Information

The family of Warren Olan Adams created this Life Tributes page to make it easy to share your memories.

Marshall; Warren Adams, age 87, of Marshall, passed away on Friday,...

Send flowers to the Adams family.