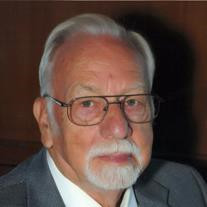 Warren Lindsley, age 83, of Marshall, Minnesota, passed away on Thursday, May 26, 2016, at the Prairie Home Hospice House in Marshall. Memorial Services are 11:00 AM Saturday, June 4, 2016, at Living Word Lutheran Church in Marshall. Visitation is one hour prior to the service, from 10:00 – 11:00 AM on Saturday, also at Living Word Lutheran Church. Reception for attendees to follow in the church basement. Clergy Officiating: Rev. David Christensen Warren Hilton Lindsley was born on July 10, 1932 in Tracy, Minnesota. He was the son of Bayard and Lavina (Cady) Lindsley. Warren was baptized as an infant at the Congregational Church in Garvin. He grew up attending country school and then Tracy schools. His family moved to Slayton in 1946, and he graduated from high school there with the class of 1950. On September 3, 1950, Warren was united in marriage to June Hartman in Slayton. The couple made their home and farmed South of Garvin and then settled near Marshall in 1958. They farmed and raised a family with 5 children: Douglas, Deborah, Steve, Vickie, and Michelle. The couple also spent over 65 years of marriage together. In addition to his farming, Warren also ran a trucking business that, at one time, managed 8 trucks. He served as past Commander of the Civil Air Patrol in Marshall before it disbanded. His other enjoyments in life were driving and traveling the country, taking pictures, boating, spending time at the lake, and he seemed to always be tinkering or fixing on something – a passion that he passed on to the next generations. Warren entered his heavenly home on Thursday, May 26, 2016, in Marshall, Minnesota at the age of 83 years, 10 months and 16 days. Blessed be his memory. Survivors include his wife, June Lindsley of Marshall; five children, Douglas (and Lora) Lindsley of Lynd, Deborah (and Steve) MacDonald of Brooklyn Park, Steve (and Kimberly) Lindsley of Marshall, Vickie (and Ronald) Schultz of Marshall, Michelle (and Douglas) Muilenburg of Platte, SD; 14 grandchildren, Jeny (and Greg) Bauer, Lacey Lindsley, Ashley (and Chris) Tolk, Anthony (and Tegan) Lindsley, Matthew (and Mandy) MacDonald, Melissa (and Trevor) Rogge, Christine Lindsley, Michael Lindsley, Cassandra (and Joey) Johnson, Curtus Schultz, Caleb Schultz, Molly Muilenburg, Emily Muilenburg, Josie Muilenburg; 13 great-grandchildren; siblings, Barbara (and Jim) Alexander of Minneapolis, Robert (and Linda) Lindsley of Park Rapids; nephews, nieces, other relatives and many friends. Warren was preceded in death by his parents, Bayard and Lavina Lindsley. The family invites attendees to a luncheon in the church basement immediately following the service.

The family of Warren Hilton Lindsley created this Life Tributes page to make it easy to share your memories.

Send flowers to the Lindsley family.