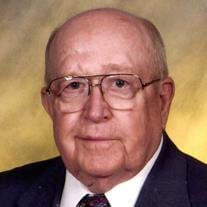 Warren Snyder, age 94, of Marshall, Minnesota, passed away on Wednesday, August 15, 2018, at Prairie View Health Care Center in Tracy, Minnesota. Memorial Services are 1:30 p.m. Tuesday, August 21, 2018, at the Hamilton Funeral Home in Marshall, Minnesota. Interment will follow in the Marshall Cemetery. Visitation will be held one hour prior to the service, from 12:30 – 1:30 p.m., Tuesday at the Hamilton Funeral Home. Warren Kenneth Snyder was born August 20, 1923, in Marshall, Minnesota. He was the son of Henry and Emma (Neiland) Snyder. Warren was born with mastoiditis and though most infants born with this malady in this day didn't survive, he grew and thrived, suffering only hearing loss in one ear. Warren was baptized on November 25, 1923 and was confirmed in his youth. He attended District 28 country school and later graduated from Marshall High School with the class of 1941. Warren went on to farm and do construction work, as well as sell insurance and real estate before he became a letter carrier for the United States Postal Service. He retired from the USPS in December of 1990. After meeting on a blind date, Warren was united in marriage to Dorothy (Rosvold) Bjornebo in Minneapolis on October 16, 1960. The couple raised four children together and shared nearly 57 years of marriage before Dorothy died in September of 2017. They lived in and around Marshall for most of their married life except for 7 years spent in Paynesville during their retirement. Warren and Dorothy spent many happy summer weekends at their cabin on Lake Koronis, fishing, gathering with friends and playing games. They were members of Albright and then Cornerstone United Methodist Church. Warren was proud to be a Mason and after retirement taught “55 Alive” driving classes and drove part-time for Lockwood Motors. He was known to be a very social guy, striking up conversations with anyone willing to listen. Warren’s many enjoyments in life included fishing, golfing, playing cards, cheering on the MN Twins and watching his grandchildren and great-grandchildren grow. Warren Snyder entered his heavenly home on Wednesday, August 15, 2018, just 5 days before his 95th birthday. Blessed be his memory. Warren is survived by his 4 children, Cheryl (and Tom) Doom of Albany, MN, Sandra (and Dan) Labat of Marshall, MN, Shelly (and Thomas) Vaccina of Winder, GA, Brian (and Nancy) Snyder of Eleva, WI; 10 grandchildren, Karol Sebastian, Karen Doom, Kristen (Brian) Thelen, Peter (Andrea) Doom, Todd (Marie) Labat, LuAnn (Ron) Springer, BJ (Alyssa) Labat, Bridget (Michael) Beck, Monica Snyder, Luke (Bethany) Snyder; 15 great-grandchildren; 4 great-great-grandchildren; nephews, nieces, other relatives and many friends. Warren is preceded in death by his parents, Henry and Emma Snyder; wife, Dorothy Snyder; 2 sisters and 4 brothers.

The family of Warren Kenneth Snyder created this Life Tributes page to make it easy to share your memories.

Warren Snyder, age 94, of Marshall, Minnesota, passed away on...

Send flowers to the Snyder family.