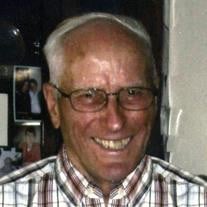 Wayne Greeley, age 93, of Marshall, Minnesota, passed away on Friday, April 15, 2016 at the Minneota Manor Care Center. Funeral Services are 11:00 AM at the Hamilton Funeral Home in Marshall. Luncheon to follow. Interment will be in the Marshall Cemetery. Visitation will be held prior to the service, from 9:30 – 11:00 AM Friday, April 22, 2016, also at Hamilton Funeral Home in Marshall. Clergy Officiating: Rev. Kelly Wasberg Special Music: “Church in the Wildwood” / “I’ll Fly Away” ~ Johnny Cash “Jesus Loves Me” / “On Eagle’s Wings” ~ Michael Joncas Casket Bearers: Virgil Johnson, Benton Johnson, Sheldon Johnson, Tim Rokeh, James Hart, Chad Hart, Nathan Hart, Roger Amundson, Mike Dale Wayne Vern Greeley was born on April 29, 1922 in Sodus Township, Minnesota. He was the son of Otis and Martha (Wedger) Greeley. Wayne attended country school through the 8th grade and farmed with his brothers until 1975. Wayne and Joyce then continue to farm until 1999. He was a farmer through and through and loved all things earth. On June 20, 1970, Wayne was united in marriage to Joyce Hart at First Baptist Church in New Ulm. The couple lived there for 1 year before settling near Amiret, where they farmed. In 2002, the couple moved into Marshall to be closer to their grandchildren. Wayne and Joyce were blessed with two boys: Jason and Darin. They shared over 45 years of marriage. In addition to farming, Wayne loved to tinker on anything that had wheels and an engine and he restored 13 Oliver tractors that were on the last farm sale. Wayne’s other enjoyments in life included collecting toy Oliver tractors, going to antique shows and auctions, garage sales with grandchildren (he always had quarters in his pocket for them to spend), watching TV westerns, repairing tractors and vehicles for family and friends in the shop on the farm, and he was proud to be a twin. He liked anything Chevy, buying and trading cars, threshing and steam shows, and spending quality time with his grandchildren. Wayne died on Friday, April 15, 2016, in Minneota, Minnesota, 2 weeks shy of his 94th birthday. Blessed be his memory. Wayne is survived by his wife, Joyce Greeley of Marshall; sons, Jason (and Amber) Greeley of Marshall, Darin Greeley of Amiret; three grandchildren, Holden, Chase, and Sage Greeley; sisters and brothers-in-law, Judy Rae (and David) Rokeh of Little Fork, Ronald (and Joyce) Hart of Finland, Gary (and Jean) Hart of Cold Spring, Lori Hart of Elkton, SD; special cousins, Mildred Thomas of Marshall, Bernice Logue of Marshall; nieces, nephews, other relatives, and many friends. He was preceded in death by his parents, Otis and Martha Greeley; parents-in-law, Howard and Edna Hart; twin sister, Wayvel Johnson; brothers, Harvey, Harold, and LeRoy Greeley; and brother-in-law, Dennis Hart. The family invites attendees to a luncheon following the committal service.

Wayne Greeley, age 93, of Marshall, Minnesota, passed away on Friday, April 15, 2016 at the Minneota Manor Care Center. Funeral Services are 11:00 AM at the Hamilton Funeral Home in Marshall. Luncheon to follow. Interment will be in the Marshall... View Obituary & Service Information

The family of Wayne Vern Greeley created this Life Tributes page to make it easy to share your memories.

Wayne Greeley, age 93, of Marshall, Minnesota, passed away on...

Send flowers to the Greeley family.