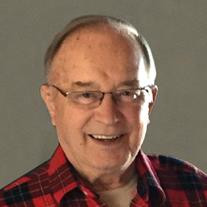 Wayne Stegner, age 76, of Marshall, Minnesota, died on Tuesday, June 4, 2019, at the Avera Marshall Regional Medical Center in Marshall, Minnesota. Funeral Services are 2:00 p.m. Friday, June 7, 2019, at the Hamilton Funeral Home in Marshall, Minnesota. Following a reception, interment will be in the Hendricks Cemetery. Visitation will be one hour prior to the service, from 1:00 – 2:00 p.m. Friday, June 7, 2019, at the Hamilton Funeral Home in Marshall. Wayne Lee Stegner was born on August 23, 1942, in Hendricks, Minnesota. He was the son of Milton and Marie (Wagner) Stegner. Wayne grew up in Hendricks, was baptized as an infant and confirmed in his youth. He attended country school before graduating from Hendricks High School in 1960. Wayne went on to further his education at Mankato State University and then South Dakota State University in Brookings, South Dakota. In 1965, Wayne enlisted in the South Dakota Air National Guard and served for 17 months as a flight simulator technician. After his honorable discharge, Wayne returned home and was united in marriage to Carolyn Hoff at First Lutheran Church in Sioux Falls, South Dakota, on March 30, 1968. The couple raised twin daughters and shared over 50 years of marriage before Carolyn’s passing in August of last year. In 1970, Wayne began his position with Allis-Chalmers as the territory manager in Eastern Iowa. Beginning in 1974, he owned an implement business in Tipton and Muscatine for over 18 years. Wayne and Carolyn moved from Wilton, Iowa, to Hendricks, Minnesota, in 2000. Wayne went on to drive truck for JB Kelley and Cliff Viessman. He was stationed out of Marshall and drove a tanker truck for many years. Wayne was proud to log over 3.5 million miles without a chargeable accident. Wayne’s hobbies included anything involving Allis-Chalmers tractors. He attended Allis-Chalmers shows, collected many scale models, and was a member of the collector’s club. Wayne was known to take a few of his own prized possession tractors through local parades as well. He was truly a people-person. Wayne loved a good joke, visiting with people and sharing in a good story. His conversations will be missed. Wayne was called home on June 4, 2019, in Marshall, Minnesota. He reached the age of 76 years, 9 months, and 12 days. Blessed be his memory. Wayne is survived by his two daughters, Brenda (and Doug) Shelton of Clive, IA, Bonnie (and Mike) Bronson of West Des Moines, IA; three grandsons, Brett Shelton, Colby Shelton, Alex Bronson; nieces, nephews, other relatives and friends. He was preceded in death by his parents, Milton and Marie Stegner; wife, Carolyn Stegner; and brothers, Dale and Gary Stegner.

The family of Wayne Lee Stegner created this Life Tributes page to make it easy to share your memories.

Send flowers to the Stegner family.