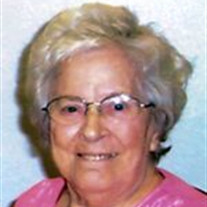 Wayvel V. Johnson, age 87, of Marshall, passed away at the Avera Morningside Heights Care Center in Marshall on Sunday, December 20, 2009. Funeral services will be 1:30 P.M. Wednesday, December 23, 2009 at Wesley United Methodist Church in Marshall. Burial will be in the Marshall Cemetery. Visitation will be 4:00 P.M. to 8:00 P.M. with a 7:00 P.M. prayer service Tuesday at the Hamilton Funeral Home. Visitation will continue at the church on Wednesday, one hour prior to the service. Wayvel Verna Johnson was born to Otis and Martha (Siggelow) Greeley on April 29, 1922 in Sodus Township, Lyon County, Minnesota. She was baptized at Wesley United Methodist Church and attended the Sunny Side School District #84 in Sodus Township. On November 4, 1953, Wayvel was united in marriage to Merton C. Johnson at the Presbyterian Church in Marshall. They farmed in Sodus Township where along with helping with the chores and housework, Wayvel enjoyed gardening, flowers, cake decorating, doing paintings, horses, and cows. She was a faithful member of Wesley church where she helped in the kitchen, and performed in the Wesley Country Kitchen Band. She also enjoyed organizing history of the Sunnyside School. Merton passed away on March 11, 1983. Wayvel moved from the farm into Marshall in 1986. She worked in house keeping for Carr Properties from 1986 to 2005. Wayvel passed way on Sunday, December 20, 2009 at Avera Morningside Heights Care Center. She had reached the age of 87 years, 7 months and 22 days. She is survived by her four children, Virgil (and Vonnie) Johnson of Marshall, Benton (Darcy) Johnson of Marshall, Sheldon Johnson of Omaha, NB and Betty (Mike) Dale of Lynd; 13 grandchildren, Terry (and Betty) Zinnel, Brent (and Marisa) Zinnel, April (and Tobey) Valdez, Justin (and Trecy) Johnson, Travis Johnson, Levi Johnson, Dan Johnson, Holly Johnson, Nathan (and Lisa) Towne, Christopher Towne, Corey Towne, Danna Johnson, and Kelley Johnson; 13 great-grandchildren; a twin brother, Wayne (and Joyce) Greeley of Marshall; and many other relatives and friends. She was preceded in death by her parents; husband, Merton; and three brothers, Harvey, Harold and Leroy. Blessed be the memory of Wayvel Johnson

The family of Wayvel Verna Johnson created this Life Tributes page to make it easy to share your memories.

Wayvel V. Johnson, age 87, of Marshall, passed away at the Avera...