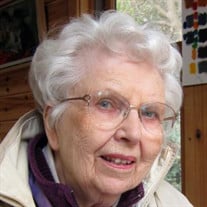 Wilburta “Burta” Jacobsen, age 98, of Marshall, Minnesota, died on Tuesday, November 9, 2021, at the Avera Tyler Hospital in Tyler, Minnesota. Memorial services will be held at in the Summer of 2022. In lieu of flowers, monetary donations can be made to St. Stephen’s Lutheran Church and Danebod Folk School. Wilburta “Burta” Sanderson was born on December 8, 1922, in Independence, Kansas. She was the daughter of Martin Wilbur and Ethel Fronie (Chapman) Sanderson. Burta attended the high school in Marysville, Kansas and graduated with the class of 1941. After graduating high school, she attended Central Business College in Kansas City, Missouri. Burta worked at Trans World Airlines in Kansas City after receiving her degree in 1942. In 1947, Burta married Henry “Hank” Jacobsen and the couple made their home in Tyler, Minnesota. To this union, 3 daughters were born. Burta worked as secretary at Jacobsen State Farm Agency and assisted her husband, who was the Secretary of the Lincoln County Fair. She was an active member of the Danebod Lutheran Church and worked as the Secretary Emeritus of the Danebod Family Camps. Burta also helped place foreign exchange students in southwestern Minnesota homes for the Youth for Understanding. She learned Danish cooking from her mother-in-law and embraced Danish cultural traditions. In 1982, Burta moved to Marshall, where she worked for Mainstay, Inc. and the Campus Religious Center at Southwest State University. She became a member of St. Stephen’s Lutheran Church. When Burta wasn’t working, she was spending her time playing cards and thoroughly enjoyed Danish cross stitching, rosemaling, and watercolor painting. She shared her love of the arts with her children. She enjoyed her final years living at Boulder Estates and made many friends wherever she lived. Wilburta Jacobsen died on Tuesday, November 9, 2021, at Avera Tyler Hospital in Tyler. She was one month shy of 99 years old. Blessed be her memory. Burta is survived by her three daughters, Susan Jacobsen of Minneapolis, Greta (and Michael) Murray of Ghent, Barbara (and Mark) Risjord of Atlanta, GA; 4 grandchildren, Jacob Murray of Brookings, SD, Anna Murray of Hills, MN, Andrea Risjord of Minneapolis, MN, Hannah Risjord (and Kennon Bouldin) of Burke, VA, nieces, nephews, other relatives, and many friends. Burta was preceded in death by her parents, Martin and Ethel (Chapman) Sanderson; sister, Martha Mason; son-in-law, Jerome Downes; former husband, Henry “Hank” Jacobsen; and parents-in-law, Aage and Andrea Jacobsen.

Wilburta &#8220;Burta&#8221; Jacobsen, age 98, of Marshall, Minnesota, died on Tuesday, November 9, 2021, at the Avera Tyler Hospital in Tyler, Minnesota. Memorial services will be held at in the Summer of 2022. In lieu of flowers, monetary... View Obituary & Service Information

The family of Wilburta "Burta" Jacobsen created this Life Tributes page to make it easy to share your memories.

Send flowers to the Jacobsen family.