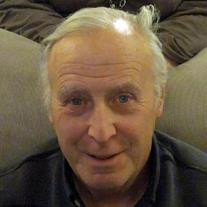 William “Bill” McCann, age 70, of Marshall, formerly of Glenwood, Minnesota, passed away on Thursday, December 22, 2016, at the Sanford Hospital in Sioux Falls, South Dakota. Memorial Services are 2:00 PM Thursday, December 29, 2016, at the Hamilton Funeral Home in Marshall. Visitation will be one hour prior to the service, from 1:00 – 2:00 PM also the Hamilton Funeral Home in Marshall. Officiating: Rev. David Johnston Organist: Rene Petersen Congregational Hymns: Amazing Grace / How Great Thou Art / Old Rugged Cross / Precious Lord, Take My Hand Urn Bearer: Ronald Engelhardt Military Honors: Marshall American Legion, Post #113 William Richard was born on Mar 13, 1946, in Minneapolis, Minnesota. At six months old, Bill was adopted by Roy and Helena (Nielson) McCann. Bill was baptized and confirmed at the Methodist Church in Glenwood, Minnesota. He attended school in Glenwood and graduated from High School there, where he was part of the wrestling team. Bill went on to take carpentry classes at a trade school and then served some 27 ½ years in the Army Reserves. On March 2, 1968, Bill was united in marriage to Judith Ann Engelhardt in Waukon, IA. The couple lived in Minneapolis, MN before returning to Glenwood where they had three children: Kevin in 1970, Jennifer in 1972, and Jody in 1974. Bill worked at Coast-to-Coast and then Hardware Hank in Glenwood. He then took a job at Tholen Autos and moved his family to Marshall. Bill and Judy shared over 48 years of marriage. Bill was a volunteer fireman, a member of the JayCees, and a member of the American Legion in Glenwood for over 13 years. He was a good father and supportive husband with a good sense of humor. Bill enjoyed gardening and yardwork, playing softball, and being called on as a handyman to fix anything. He will be missed. William McCann passed away on Thursday, December 22, 2016, at the age of 70 years, 9 months, and 9 days. Blessed be his memory. Bill is survived by his wife, Judy McCann of Marshall; children, Kevin (Shannon) McCann of San Diego, CA, Jennifer McCann (Dean Sanvig) of Marshall; 6 grandchildren, Brandon, Haley, Garret, McKensie, Alatera, Isaiah; other relatives and friends. Bill is preceded in death by his parents, Roy and Helena McCann; daughter, Jody Marie McCann; and parents-in-law, Philmon & Margaret Engelhardt.

The family of William "Bill" Richard McCann created this Life Tributes page to make it easy to share your memories.

Send flowers to the McCann family.