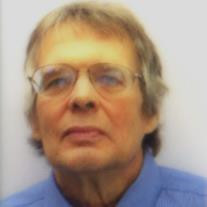 Dr. William Du Bois, age 68, of Russell, Minnesota, passed away on Friday, February 24, 2017 at the Avera Marshall Regional Medical Center. Funeral services are 11:00 a.m. Wednesday, March 1, 2017, at Hamilton Funeral Home in Marshall. Visitation will be held from 5:00 – 7:00 p.m., Tuesday, February 28, 2017, at the Hamilton Funeral Home in Marshall. Visitation will continue one hour prior to the service, from 10:00 – 11:00 a.m., on Wednesday again at the Hamilton Funeral Home. Interment will be at 9:00 a.m., Thursday, March 2, 2017 in the I.O.O.F. Cemetery, Bloomfield, Iowa. William David Du Bois was born on April 28, 1948 in Ottumwa, Iowa. He was raised in Ottumwa by Edward and Barbara (Barker) Du Bois. He attended school in Ottumwa through High School, graduating in 1966. His thirst for education would never go away. He moved to many places while learning and teaching. He studied at William Penn University, the University of Arkansas, Sonoma State University, and ultimately, he earned his Doctorate in Sociology from Oklahoma State University. He taught in some of his alma matters in addition to Drake University, Iowa State, St. Cloud State, Mankato State, and South Dakota State University. Since 2005, Bill has been employed as a professor at Southwest Minnesota State University in Marshall. Bill was an effective activist and widely recognized organizer. He had a brilliant mind and truly loved teaching others. His legacy can be seen in countless students who sat under his direction. He also was a consultant for designing social spaces, such as bars, to increase efficiency and improve business. Bill also worked with a small community in Iowa to keep businesses alive during the 1980s farm crisis. Bill passed away on Friday, February 24, 2017, at the Avera Marshall Regional Medical center at the age of 68 years, 9 months, and 27 days. Bill is survived by his significant other, Rita Tate of Sioux Falls, SD; sister, Kathy (Don) Thompson of Ottumwa, IA; step-mother, Dicey Stater of California; nephews, nieces, other relatives and friends. He was preceded in death by his parents, Ed and Barbara Du Bois. Blessed be his memory.

The family of Dr. William David Du Bois created this Life Tributes page to make it easy to share your memories.