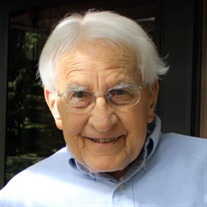 Dr. William Hunt, age 88, of Ghent, Minnesota, died on Wednesday, December 22, 2021, at the Avera Morningside Heights Care Center in Marshall, Minnesota. A celebration of life will take place at a later date. In lieu of flowers, donations may be made to a charity of donor’s choice. William “Bill” Harrison Hunt was born on December 13, 1933, in Dayton, Kentucky. He was the son of Clifford Ely and Helen Eustis (Stacy) Hunt. Bill was raised in Fort Thomas, Kentucky, with his older brother, Clifford Junior, and older sisters, Betty and Harriet. Bill attended Hanover College and went on to spend a year in France studying abroad. He then enrolled in graduate studies at Vanderbilt University. In the late 1950s, Bill returned to France in order to gather research for his PhD. In his later years, Bill often spoke of the many stories he had of the times he spent travelling and interviewing politicians in France, and about experiences aboard the ships that took him to and from Europe. In 1966, after Bill completed his Doctorate in Philosophy in Political Science, he was united in marriage to Patricia “Penny” Paul in Lexington, Kentucky. The couple spent the next 55 years together raising their 10 children and fostering three children. Bill taught political science at several universities in the Ohio and Virginia areas before the family settled in southwestern Minnesota in 1970. Bill taught at Southwest State University for a number of years but ended his formal career at the University of Minnesota in Morris in 2008. He was a lifelong professor who loved teaching, conversing with, and mentoring his students. Family was of the utmost importance to Bill. After his children grew and their lives took them to different parts of the country and Canada, he and Penny would travel to all corners to visit his children and their families. One of Bill’s favorite ways to pass time was to have a good meal, and even better conversations, with his family and friends. Ice cream would always follow these meals. He touched the lives of many, and those people have happy memories of their time with Bill. Dr. William Harrison Hunt died on Wednesday, December 22, 2021, at the Avera Morningside Heights Care Center in Marshall, Minnesota. He reached the age of 88 years and 9 days. Blessed be his memory. Bill is survived by his wife, Penny Hunt of Ghent; 10 children, Stacy Hunt (Rick Jaskolski) of Kenosha, Wisconsin, Barb Grabill (Paul) of San Diego, California, Matt Hunt (Kristine Mosing) of Minneapolis, Minnesota, Becca Hunt of Temiskaming Shores, Ontario, Tim Hunt of Dover, New Hampshire, Tolif Hunt (Tanya) of Cedar Falls, Iowa, Paul Bjorn Hunt (Kjersten) of Perham, Minnesota, Flossie Hunt (JD Fier) of Nashua, New Hampshire, Betsy Baxter (Nick) of Greenwood, Indiana, Kate Hunt (Mike Gruszczynski) of Bloomington, Indiana; 23 grandchildren, Valerie, Molly, Melanie, Jakob, Elyssa (Josh), Kaeleigh, Jessica, Joe, Eleanore, Aiden, Oliver, Rylee, Reese, Stella, Taylor, Dylan, Brayden, Carsen, Silas, Logen, Brycen, Ella, Griffin; 4 great-grandchildren; extended family members; and so many friends who crossed paths with him, sometimes living with the family for brief and long periods of time and who stayed in his life over the years. Bill is preceded in death by his parents, Clifford and Helen Hunt and his brother and sisters.

Dr. William Hunt, age 88, of Ghent, Minnesota, died on Wednesday, December 22, 2021, at the Avera Morningside Heights Care Center in Marshall, Minnesota. A celebration of life will take place at a later date. In lieu of flowers, donations may... View Obituary & Service Information

The family of Dr. William Harrison Hunt created this Life Tributes page to make it easy to share your memories.

Send flowers to the Hunt family.