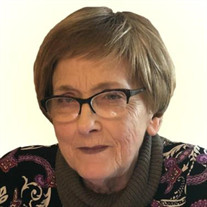 Wilma Lanners, age 77, of Marshall, Minnesota, died on Tuesday, December 7, 2021, at the Avera McKennan Hospital in Sioux Falls, South Dakota. Funeral Services are 2:30 p.m. Saturday, December 11, 2021, at Cornerstone United Methodist Church in Marshall, Minnesota. Interment will follow in the St. Edward Catholic Cemetery in Minneota, Minnesota. A reception for attendees will then be held, back at the church. Visitation will be held prior to the service on Saturday, from 1:00 p.m. until the time of services at 2:30 p.m., also at the church. Wilma Anne Bos was born August 19, 1944, in Luverne, Minnesota, to parents Cornelis and Henrietta (Van Hulzen) Bos. She grew up outside of Edgerton, Minnesota, on the family farm near the Rock River. She was baptized and confirmed in her youth and received her education at Edgerton public schools, graduating with the high school class of 1962. She went on to study home economics at SDSU. On September 18, 1964, she was married to Casey Veldhuizen. The couple spent 25 years together and had three children while living and farming outside Woodstock. While raising her family, Wilma helped on the farm and worked for the New Life Treatment Center in Woodstock. Wilma managed a gas station in Pipestone for a time and then went to Dakotah Toys in Arlington, South Dakota. On June 26th, 1993, Wilma was united in marriage to John “Jack” Lanners in Marshall and the couple spent 24 years together prior to his death in 2017. During this time Wilma was working with Jack in the Lanners Construction business, based out of Marshall. Wilma was a woman of incredible faith which helped her overcome many challenges in life. She was a faithful member first of First Reformed Church in Edgerton, Woodstock Reformed Church, and then Cornerstone United Methodist Church in Marshall where she served in many areas. Wilma had a servant's heart and was always willing to try and help others, often quietly. That care extended to her family as she attended all events and tried to stay involved as much as possible in the lives of her children and grandchildren. Her enjoyments included gardening, floral arranging, sewing, and knitting. Wilma Lanners died on Tuesday, December 7, 2021, at the Avera McKennan Hospital in Sioux Falls, South Dakota. She reached the age of 77 years, 3 months, and 19 days. Blessed be her memory. Wilma is survived by her daughters, Renee (and Patrick) Kinney of Miami, FL, Stacey Ross of Marshall; step-children, Amy Lanners of San Diego, CA, Brenda (and Marty) Lanners of Sand Diego CA, Christa (and Matt) Hopkins of Bailey CO, Richard (and Angela) Lanners of Underwood; grandchildren, Jasmine Kinney, Darian Ross, Natasha Ross, Gabriella Ross, Kameron Ross, McKensi (and Craig) Long, Elijah (and Via) Reed, Max Lanners, Remy Lanners, Ella Hopkins, Lily Hopkins, Benjamin Lanners, Samantha Lanners, Evelyn Lanners, Madelyn Lanners; 2 sisters, Annetta Hendriks of Edgerton, CoraJean (and Dennis) Kuehl of Longmont, CO; sister-in-law, Janice Bos; brother-in-law, Dennis Parker; nieces, nephews, other relatives, and friends. She is preceded in death by her parents, Cornelis and Henrietta Bos; husband, Jack Lanners; son, Michael Lee Veldhuizen; siblings, Herman Bos and Joan Parker.

The family of Wilma Anne Lanners created this Life Tributes page to make it easy to share your memories.

Send flowers to the Lanners family.