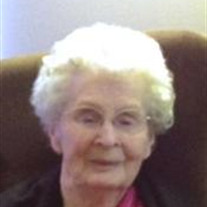 Marshall: Winifred Loats, age 96, passed away Wednesday, October 17, 2012 at the Colonial Manor in Balaton. Funeral services will be 2:00 P.M. Monday, October 22nd at the Balaton United Methodist Church. Visitation will be one hour prior to the service. Burial will be in the Lakeside Cemetery. Winifred Anna Loats was born on June 9, 1916 just outside Balaton, Minnesota. She attended schools in Balaton, Morris, Hancock and Russell, Minnesota. Winifred was a sickly child who was forced to drop out of high school after two years, due to her poor health. She eventually went to work and was employed at the Balaton Drug Store (Tenhoff’s) and Gag Drug in Marshall. Winifred met Roy Loats at a gas station in Balaton and they dated for several years before marrying in 1941. They set up residence in a tiny home outside Balaton, moving to the Loats homestead after Richard’s birth in 1943. In 1951 there was another addition to the family when Diane was born. Winifred spent her time on the farm raising a family, cooking, gardening, sewing and assisting Roy on the farm. She taught Sunday School for ten years at the Balaton Presbyterian Church, prior to its closing. Roy and Winifred moved to the Marshall Square Apartments in 1980, where Winifred continued to reside after Roy’s death in 1996. After a decline in health, she moved to the Boulder Estates in Marshall in September 2009 and into the Balaton Colonial Manor in March 2010. Winifred loved her home at Colonial Manor, taking great joy in visits from family, friends and staff. She enjoyed opportunities to talk about family memories, her faith, her travels with Roy, or her grandchildren. She looked forward to a game of Five Hundred, Yahtzee or Pinnochle, always playing with a goal of winning. She was excited whenever luck was with her and she was able to win at games of bingo or horse raising, calling those times “good days!” She thoroughly enjoyed her grandchildren and was so excited to visit with them. Winnifred is survived by two children, Richard and Julie Loats of Raleigh NC and Diane Loats of St. Paul; her sister, Genevieve Scott, who resides in Florida; seven grandchildren, Rick and Lori Loats, Phil and Shari Loats, Greg and Vanna Loats, Keith Loats, Ramon and Vicki Wilder, Tonicia Loats, Trevor Loats and Summer Sutcliffe; several step grandchildren, Mel and Penny Goon, Ron Martin, Denice Barnes and Annie Wilder; several great grandchildren; and numerous nieces and nephews. She was preceded in death by her parents, Charles and Anna Brown; husband Roy; sisters Berniece and Awanda; and her twin brother Wayne. Winifred will always be remembered for her love of jewelry, clothes and a good piece of chocolate, her kind heart, competitive spirit (she played a game to win!), good sense of humor, and her love of the Lord. She will be missed dearly by her family and friends. Blessed be the memory of Winifred Loats.

Marshall: Winifred Loats, age 96, passed away Wednesday, October 17, 2012 at the Colonial Manor in Balaton. Funeral services will be 2:00 P.M. Monday, October 22nd at the Balaton United Methodist Church. Visitation will be one hour prior to... View Obituary & Service Information

The family of Winifred Anna Loats created this Life Tributes page to make it easy to share your memories.

Send flowers to the Loats family.