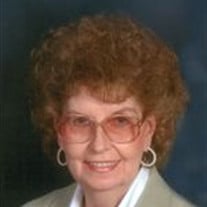 Yvonne “Vonnie” Tomasek, age 77, of Marshall passed away at Avera Marshall Regional Medical Center on July 6, 2009. Funeral services are planned for 10:30 AM Friday, July 10, 2009 at Our Savior’s Lutheran Church in Milroy. Visitation will be held on Thursday evening, July 9, from 6 to 8 P.M. with a prayer service at 7:30 at the Hamilton Funeral Home in Marshall. Burial will be in the Milroy Public Cemetery. Visitation will continue one hour prior to the service on Friday, at the church. Online condolences may be submitted at www.hamiltofh.com. Yvonne Joan Raveling was born to William and Sena (Arends) Raveling on December 23, 1931 in Vail Township, Redwood County, Minnesota. She was baptized and confirmed at St. Matthews Lutheran Church in Waterbury Township. At age four, Vonnie moved with her family to Granite Rock Township and then to Lucan in 1949 when her parents retired. She graduated from Milroy Public School in 1949. On June 7, 1951 Yvonne was united in marriage to Charles Tomasek at St. Matthews Church. She and Charles lived in Milroy for 58 years where she worked as on office manager and at the bank. She was also a member of Our Savior’s Lutheran Church where she taught Sunday school and Vacation Bible School. She was an officer of WELCA and a circle member. She also belonged to the American Legion Auxiliary. Vonnie and Charles were the parade Marshals for Milroy’s Centennial celebration. She was a true servant and always put others first. Vonnie’s other enjoyments in life were butterflies, flowers, cooking hot meals, making rosettes, preparing duck for holidays, spending time with family and friends, and her great sense of humor. Vonnie is survived by her husband, Charles Tomasek of Marshall; two daughters, Sherri (and Tom) Patzer of Mitchell, South Dakota, and Michelle (and Gary) Stassen of Marshall; five grandchildren, Ryan (and Amanda Jo) Patzer of Mitchell, Amanda (and Greg) Neppl of Mitchell, Christopher Stassen of Marshall, Nicholas Stassen of Marshall, and Melissa Stassen of Marshall; sister, Elaine Hansen of Lamberton; nephew, Dennis Hansen of Chanhassen; and many other relatives and friends. She was preceded in death by her parents; brother-in-law, Kenneth Hansen; and nephew, Gary Hansen. Flowers are welcome. Memorials are being directed to the Memory Care Unit of Avera Morningside Heights Care Center in Marshall and Our Savior’s Lutheran Church in Milroy. Blessed be the memory of Yvonne “Vonnie” Tomasek

The family of Yvonne Tomasek created this Life Tributes page to make it easy to share your memories.

Yvonne “Vonnie” Tomasek, age 77, of Marshall passed away at Avera...

Send flowers to the Tomasek family.